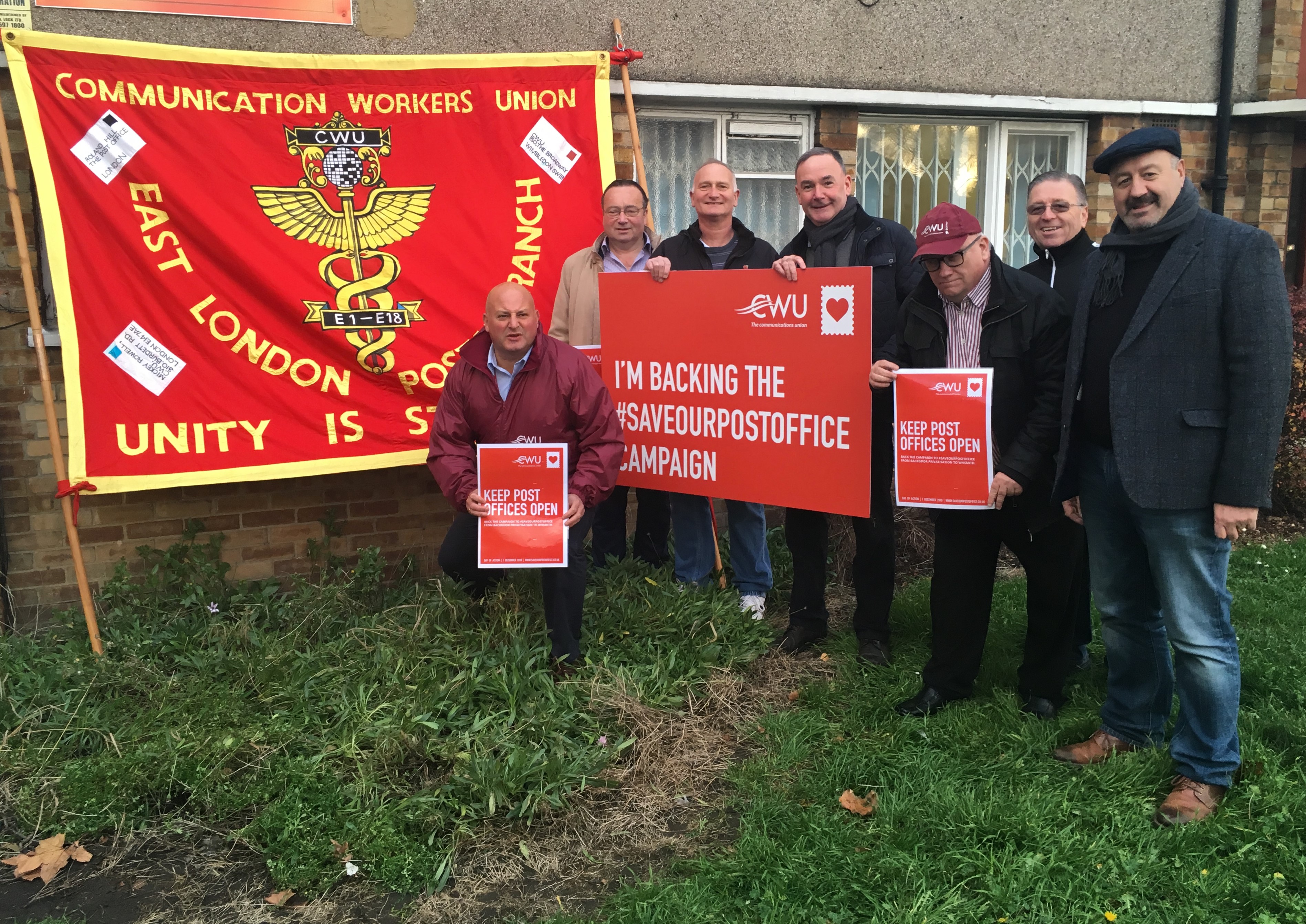 This week Jon Cruddas MP for Dagenham and Rainham pledged his support for the Communication Workers Union (CWU) #SaveOurPostOffice campaign. The campaign was launched by the CWU to halt the ?franchising' of 74 Crown Post Offices to WHSmith. If the move takes place it will mean 60 per cent of the Crown Network which existed in 2013 will be gone following years of incremental privatisation.

Jon Cruddas said: "?Franchising' is nothing but back door privatisation and research shows that franchising the Crown Post Offices to WHSmith could lead to a sub-standard service, reduced counter services, staff redundancies, and the watering down of workers terms and conditions."

Cllr Phil Waker (CWU) commented: "There's a bigger picture here, and this move is just another in a long line of poor decisions which are driving down pay and working conditions. There is scope for Crown Post Offices to offer more government services to make them sustainable in the long term."

On Friday 30th November Jon met with members of the CWU East London Postal Branch to discuss the campaign and the potential impacts on over 800 staff across the 74 Crown Post Office sites. The Communications Workers Union (CWU), which represents many of the workers in the Crown Network were not engaged by the Post Office at all prior to the announcement.

In 2013 Jon Cruddas fought alongside the union in a bid to save the Dagenham Heathway Crown Office and met with similar circumstances.

The CWU have stated that ?around 800 staff will be affected by this round of franchising and it will cost at least £30 million in compensation payments.'

Jon added: "It looks to me like the only beneficiary of this move will be WHSmith, who are seemingly being bailed out of their failing business model with £30 million of public money."

Cllr Lee Waker, CWU East London Postal Branch said: "Handing over profit-making Crown Post Offices to a failing retailer, whose business model is based on low wage part-time employment is not an answer to anything. My union are fighting against this and calling on the government to step in to halt this privatisation."

Jon has written to the Parliamentary Undersecretary of State and Minister for Small Business, Consumers and Corporate Responsibility who presides over Postal Affairs, urging the government to halt the privatisation. You can read Jon's letter in full HERE

You can find out more about the campaign, sign the petition, can call on your MP to pledge their support via the campaign website set up by the CWU: http://www.saveourpostoffice.co.uk/

This Saturday is a National Day of Action to #SaveOurPostOffice ? you can join the demonstration from 9am - 1pm outside the Crown Post Office, 120 Kingsland High Street, London E8 2NS.