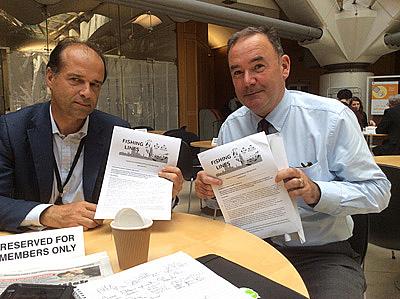 The Angling Trust has cranked up the pressure to save the UK's threatened bass stocks with a hard-hitting briefing calling for immediate parliamentary action, which is being sent to all MPs this week.

The Westminster Bass Briefing has been jointly produced by Angling Trust Campaigns Chief Martin Salter and Marine Campaigns Manager David Mitchell. It follows on from last week's letter to UK Fisheries Minister George Eustice calling on him to introduce a series of conservation measures to protect UK bass stocks in the face of latest scientific advice from ICES, which has recommended a staggering 80 per cent cut in catches in order to protect the future of the species.

The Trust is asking MPs to write to George Eustice, and his Welsh counterpart Rebecca Evans, pressing the case for bass conservation measures now in UK inshore waters rather than waiting for any action from Europe.

Last week Martin Salter held cross party talks on the plight of bass with MPs from the All Party Parliamentary Angling Group which includes Jon Cruddas MP, Member of Parliament for Dagenham and Rainham.

Conservation measures set out in the Trust's briefing to MPs include:

MPs are also being encouraged to table parliamentary questions on bass conservation.

Jon Cruddas MP said: "The figures paint a bleak future for bass in UK waters unless drastic action is taken. As a keen angler myself, I fully support the work of the All Party Parliamentary Angling Group. I am urging bass anglers from across the country to increase the pressure on government by contacting their local MP's and getting them to join the campaign.

"It would be a huge shame to lose these fantastic fish from our waters for good. I hope that this campaign will continue to gain momentum and cross party support."

The original article was posted on fishingmagic.com and can be read here: http://www.fishingmagic.com/news_events/news/17707-the-%E2%80%98battle-for-bass%E2%80%99.html