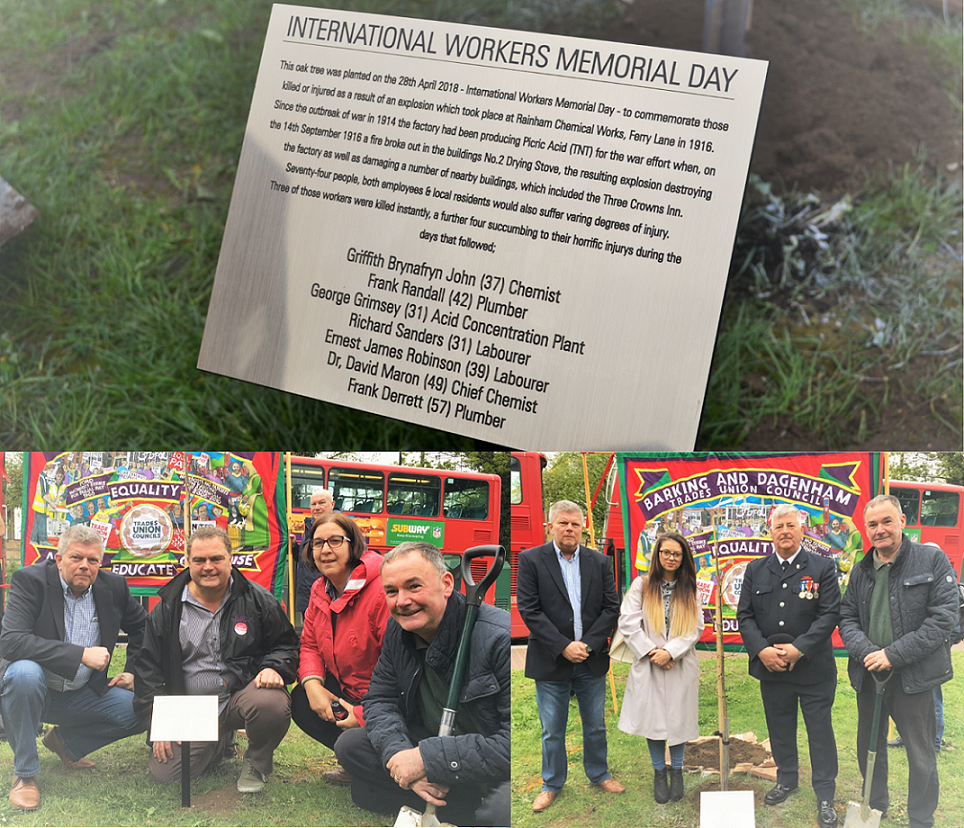 Last year Barking, Dagenham and Havering Trades Union Council along with Jon Cruddas MP planted an oak tree and plaque to commemorate those killed as a result of an explosion at Rainham Chemical Works, Ferry Lane in 1916. The incident claimed the lives of seven men and wasn't reported at the time because the factory was making munitions for the war effort.

The Barking, Dagenham & Havering TUC are now looking to fund a permanent memorial stone which will be placed on the green outside Rainham Library to ensure that these men and this tragic event are remembered as part of our local history.

Sean Connolly, local resident and Unite the Union said: "the Rainham War Memorial was similarly funded by local donations almost 100 years ago, we thought it appropriate that Rainham's residents should once more be given the opportunity to help fund a memorial alongside a number of local Trade Union organisations."

Local MP Jon Cruddas who was at the event last year is in full support of the campaign to establish a permanent memorial on the site.

Jon said: "this is an important piece of local history which was lost from memory for many years. Hat's off to Sean Connolly for all the work he has put in to ensure that this event is properly remembered. I'm urging residents to give what they can so that this event, the workers who lost their lives, and the volunteer firefighters who bravely extinguished the blaze are never forgotten."

September 14th 1916, a fire broke out in the factory. Several large explosions caused considerable damage to the nearby area. Those living close by escaped in boats on the river and workers were evacuated. A great number of people were injured, and seven men lost their lives in the fire. Sadder still, is that none of these men or this tragic event are commemorated locally.

Fay Hough, Havering Coordinator for Jon Cruddas MP commented: "one of my election pledges last year was to work with residents to establish a stone memorial on the site. I was 74 votes off but I'm still working hard for my community. We have a proud history in Rainham, and we must never forget the people and events that shaped our area."

The cost of the memorial stone, which is being made by a company in Suffolk, is £940 so any donations, large or small, will be gratefully received. BD&H TUC are aiming for £1000 to cover any additional administrative fees and crowdfunder charges.