Jon Presents the Freedom of Barking and Dagenham 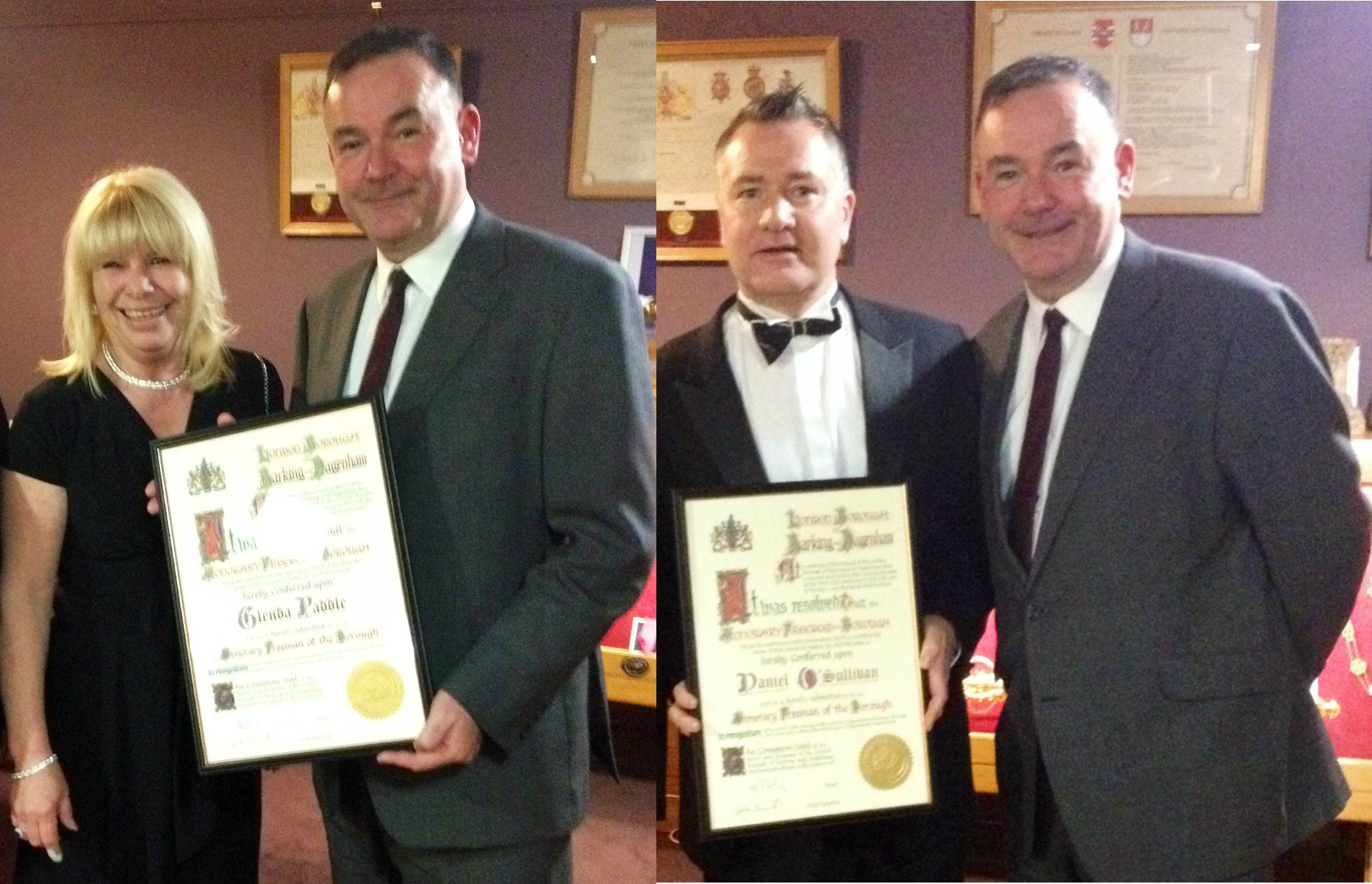 At a ceremony on Friday 28th February, Jon Cruddas MP proudly presented the Freedom of the Borough of Barking and Dagenham to Ms Glenda Paddle and Mr Daniel O'Sullivan. Their selfless dedication to help and improve the lives of others within the borough has seen the two clock up nearly 70 years of service.

Having moved to Chadwell Heath from Newham in 1976 and following the birth of her two children, Ms Paddle became actively involved in local education. Subsequent to her election to School Governor of Furze Infants School, Warren Junior School and Warren Comprehensive School, she became the Chair of Governors at the first two and Vice-Chair at the latter, a position which she held for more than ten years.

Ms Paddle has also served as a Magistrate at Barking Magistrates Court for nearly ten years, sitting in both the Adult and Family Courts.

She was part of the team that oversaw the establishment of the first "Hard Federation" in the Borough between WarrenJuniorSchool and FurzeInfantsSchool in 2010. The highlight of her career in education came in November 2012 when WarrenJuniorSchool was awarded ?Outstanding' by an Ofsted inspection, this was followed the next year by a grading of ?Good' for FurzeInfantsSchool. These exceptional successes were only possible due to the hard work and dedication of the staff, governors, parents and students of these schools.

Glenda continues in her role as Chair of Governors for each school and still demonstrates the passion, commitment and drive that were instrumental in ensuring success in her career in education.

Daniel O'Sullivan started his own career in boxing at the age of eight supported by his family. Having boxed competitively for seven years, he joined the Police Force in 1990 and still continues to serve the community in this role.

He is being honoured for his management of the Dagenham Boys Boxing Club. In addition to his full time job, Mr O'Sullivan does the day to day running of the club including the administration and funding applications. Furthermore, he is an elected member of the London Amateur Boxing Association and was previously a member of the National Governing Body. He regularly coaches students each week and arranges boxing shows in London and the South East. He was also the Boxing Ring Announcer at the London 2012 Olympic Games.

One of the biggest achievements of the Club is its links with many local partner agencies. The Club provides taster sessions for local schools to create pathways into amateur boxing, it has piloted national programmes and continues to offer non-contact boxing holiday programmes. Mr O'Sullivan continues to be supported in his work by his family and a number of very willing and supportive Volunteer Coaches. The recent renewal of their lease by the LBBD means that the Club will continue to be an edifying example of community cohesion in action which makes a big impact on the lives of the young people that it seeks to help.

Jon Cruddas MP said "I am delighted that Glenda has been recognised for her determination and tireless work towards improving the educational opportunities for our young people. Equally Daniel's passion and commitment to the work of Dagenham Boxing Club is a highly commendable example of a consummate record of service to our youth. I greatly welcome the recognition of these two anchors of the local community with the Freedom of the Borough.

At the ceremony on Friday 28th February, Ms Paddle and Mr O'Sullivan both received the scrolls commensurate being awarded the highest recognition that the Borough can offer. The Freedom of the Borough of Barking and Dagenham is a rare and historic title given to those who demonstrate exceptional service.