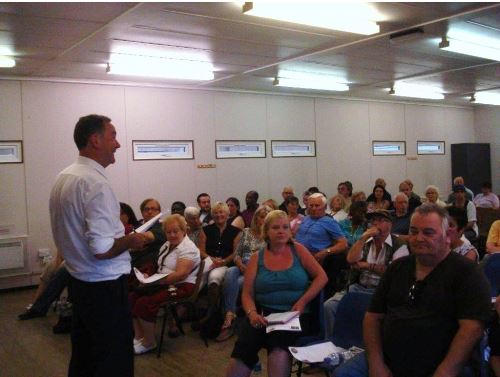 Last Thursday Jon Cruddas MP for Dagenham and Rainham held two successive public consultation meetings in Dagenham. The meetings were organised to address the growing local concern around the proposals from the Ministry of Justice to build a 2000 capacity prison facility on the Beam Park site between Dagenham and Rainham. The meetings were a huge success giving local residents the chance to ask Jon questions and explain their concerns for the local area. The main issue of contention is the promise of local jobs being created, however the arguments against this suggest that there will be very few local employment opportunities in comparison to the promised 800-900. The role of a Prison Officer is a highly skilled position and generally when a new prison is opened they are asked to commute from neighbouring facilities ? in our case, possibly from Chelmsford. Sources have suggested that there will also be very little in the way of service roles for local residents with the inmates carrying out tasks such as; cooking, cleaning, gardening, and maintenance. With school places in the limelight last week, many residents objected to land being used for a prison when there is a critical need for new schools in the borough. The ?SAY NO' campaign is still ongoing and Jon promised at the meeting to "keep the pressure up and make sure that all of the prospective sites are considered equally. Making sure that local residents concerns are heard during the consultation process."