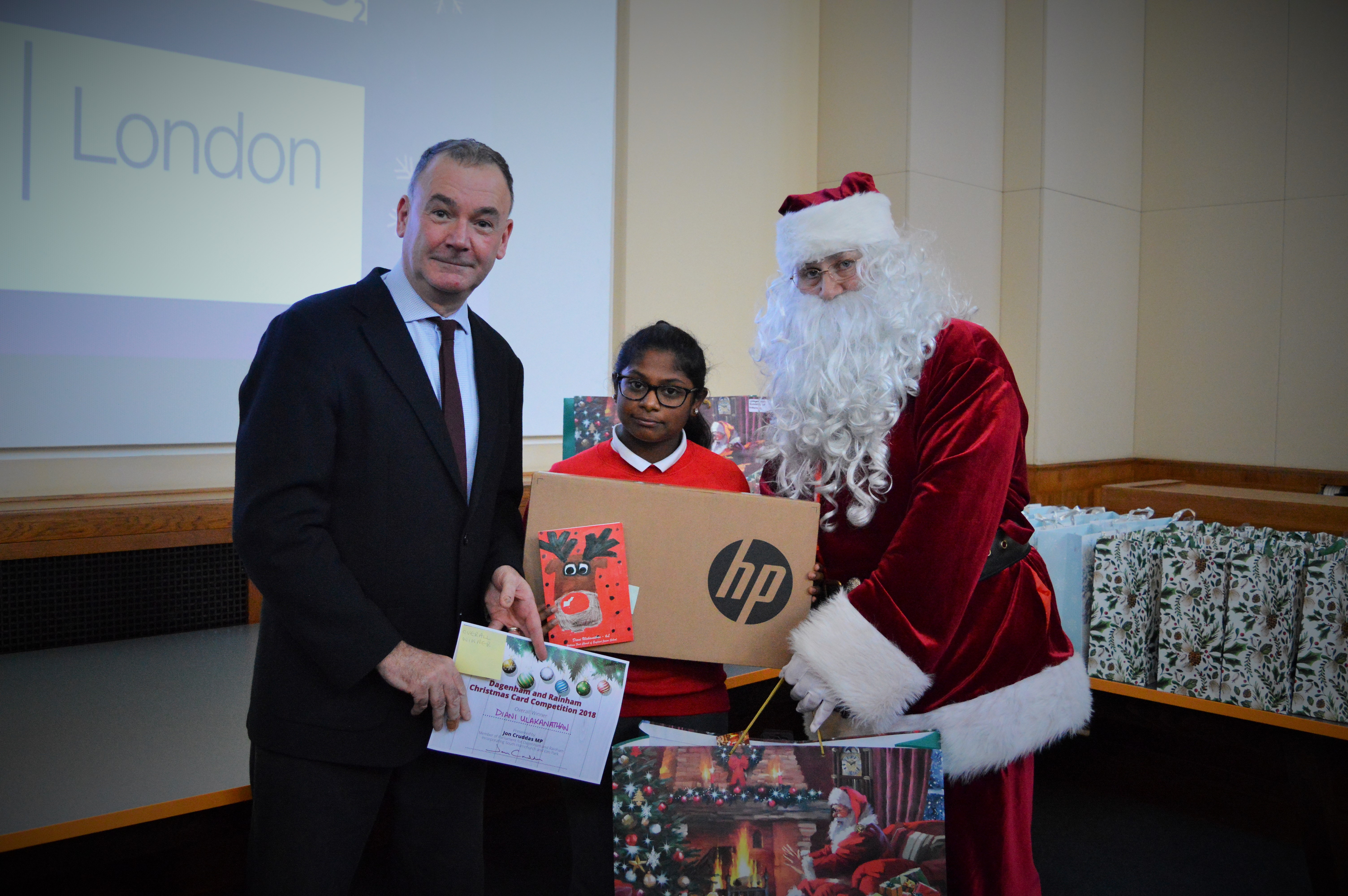 Jon Cruddas MP for Dagenham and Rainham held his eighth annual Christmas Card Competition Prize Event earlier today at the old Dagenham Civic Centre, now Coventry University. With the help of this year's 24 sponsors, the Chamber was transformed with balloons and Christmas music. All the prizes were presented in front of a packed room by Jon Cruddas MP and Father Christmas.

Not only were 22 schools from all over the constituency present but so was the Leader of Barking and Dagenham Council, Darren Rodwell, and the Associate Pro Vice Chancellor of Coventry University London, Andy Ginn.

From the thousands of amazing cards that were sent in the overall winner, Diani Ulakanathan, from William Ford Church of England Junior School, choose a state of the art HP Full HD Laptop as her prize. She also received two tickets for an ?Up at the O2' experience and tickets to a West Ham home game. The overall runner up, Darcy Gordon, from Newtons Primary School, chose an X-Hover-1 electric scooter and received a Tour of the London Stadium at the Olympic Park for a family of four.

All the winners and runner ups from the other schools received a winners bag including an Incredibles 2 DVD, a £10 toy shop voucher, £10 cinema voucher, Christmas chocolates, sweets and a teddy.

The winning card will be the official Christmas card for Jon Cruddas MP and will be sent to 2,500 people including the Shadow Cabinet, local dignitaries, Jon's Volunteers, residents, and even the Prime Minister.

Jon Cruddas said: "this is the best event of the year, and I always look forward to it. All 24 of our sponsors donated very generously this year which made the prizes even bigger and better than previous years.

"The competition is a major operation in my office and we start organising it in July, it's always worth the effort to see the winners getting what they wanted for Christmas. I can't wait till next year when my office is flooded by thousands of designs from children all across Dagenham, Rainham, South Hornchurch and Elm Park."

The last prize was given out by Steve Thompson from Dagenham and Redbridge FC, who graciously donated the opportunity to be the Mascot at an upcoming home fixture. As the mascot, the winner will join the team in front of loyal fans on the stadium turf. Also included is a full Dagenham and Redbridge kit, photo and write up in the match day programme, photographic memento of the day and three tickets to the Carling stand on the Day. This amazing prize was won by Thomas Major from St. Albans Catholic School.

Overall this was a great event and it was wonderful to see all the kids collect their prizes. Jon and his office are looking forwards to the holidays and the wonderful cards they will inevitably receive next year!