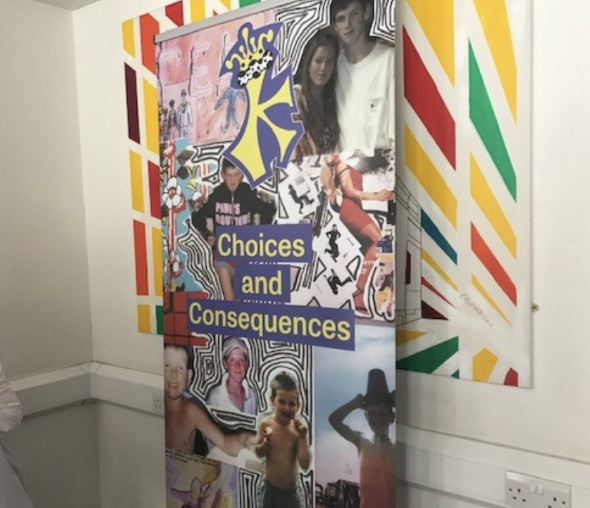 The Ben Kinsella Trust educates people on the dangers of knife crime and helps them to make positive choices to stay safe. Their workshops aim to change young people's attitudes to knife crime; debunking the myth that carrying a knife will protect you.

Last week, The Ben Kinsella Trust opened an anti-knife crime education space in Barking, which includes a "Choices and Consequences" exhibition space. The exhibition will use actors in interactive workshops to deliver hard-hitting examples of the consequences of knife crime, for the victim and the offender.

Brooke Kinsella, Chair of Trustees, and founder of the Ben Kinsella Trust has worked tirelessly to campaign for action and justice for those affected by knife crime. She was at the launch event to open the exhibition.

Brooke Kinsella: "If one young person walks through the exhibition and decides not to use a knife, it's all worth it for me."

The exhibition is one of the outcomes from the London Borough of Barking and Dagenham Council's "Lost Hours" campaign which was launched in August 2020. The aim of the campaign is to tackle youth violence in the borough, particularly focusing on the hours between 3pm to 7pm, where data shows an increase of crime and exploitation.

Councillor Margaret Mullane, Cabinet Member for Enforcement and Community Safety: "We want to make Barking and Dagenham a no-go area for knife crime, but there's only so much police can do, which is why we launched our Lost Hours campaign and why we put in place our Responsible Retailer Scheme. Together, we will tackle this appalling crime."

How to get involved

To book in for a Knife Crime Workshop, please contact: queries@benkinsella.org.uk OR 0208 164 2634 Schools and youth groups based in Barking and Dagenham attend for free, but The Ben Kinsella Trust also cater for organisations in all areas including the neighbouring boroughs.

Jon Cruddas MP: "We can't arrest our way out of the violent crime crisis, it will also take the work of organisations such as the Ben Kinsella Trust to address the underlying issues. The Trust deliver vital projects and I am very pleased to see that they have found a new home in Barking and Dagenham. I commend the work of Cllr Margaret Mullane, who has been a strong local lead in the fight against serious violent crime. Her work with the police, local partners and her role in bringing the Ben Kinsella Trust to the area are key elements in how we move forward to deliver safer streets and a brighter future for our young people."